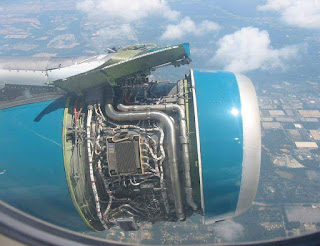 Well, most of us who ever flown on an aeroplane must have amazed by sceneries when we looked outside through plane windows, but I bet no one ever wants to see this one.

While most of might get sacred of this but this guy is giving us reassurance and reason why not panic.

Comment: 1
I would be a tad concerned:-) however providing that the outer casing has not touched the wing whilst shredding it's skin and that the engine has not started to fall out plus no fire then I would happily fly around like that all day long  it's only fancy casing hiding the engine which is always under massive pressure so don't panic it's no big deal fly and enjoy  ps I'm never getting on a plane again !

And some even cracking jokes about it.

Comment: 2
I was on a 747 once and one of the engines blew up and the pilot came on the radio and said ' ladies and gentlemen there is nothing to worry about I am simply going to throttle back on the remaining 3 engines , this however means we will be arriving an hour later than expected ' a little further on in the flight a second engine stopped , again the pilot said ' nothing to worry about we will be 3 hours late ' still further into the flight a 3rd engine went and he came on ' nothing to panic about we are going to be 6 hours late '.

The irish man next to me said ' I hope the last engine doesn't stop or we will be up here all fucking day '.

And this guy even giving someone options what to do.

Comment: 3
To those who like flying, when you wake up from sleep, open the window slide, and you see this. What would you do?
A) Get out of the plane and fix it.
B) Text your girl/boy not to find someone till you are confirmed dead.
C) Make a will for the yet-to-produce offspring of your next generation in the next life.
D) Fuck the world you are living in and get back to sleep.
E) Tell the pilot to fly to the moon so that you'd see the beauty of the earth from above and die peacefully.
F) Have a cup of tea, look out of the window and enjoy the moment of your last breath.
Pick one.

Well, I might go for the option (A), not good hanging in the mid air for too long. lol