Truestoryasa split (I did not choose to live says Sheikh Akbar) 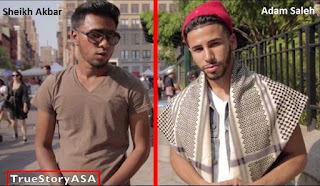 If you already know who Sheikh Akbar is and you want to know why he left TrueStory ASA then you can watch video number 3 and 7 on this page to hear what he says. And if you don't know about him then let me tell you.

He is a US born YouTuber, he made lot of videos with his 'friend' Adam Saleh and they had lot of subscribers and they were quite popular all over the world until May 11, 2015 they got split up for some reason no one really knows why.

As you can see Adam has said many things in this video but in real life you can't see any of them. For example:


Video 2, Sheikh used to get bullied by Adam:
Who knows this could be his (Sheikh's) last and final time to get big time bullied.


After watching this now go and watch the first video and look at Sheikh's face, it seems like he has been forced to say those things. :(
Sheikh might have learned his lesson and thought no point hanging around with other strange people, that's why nowadays he hangs around with Bangalis most of the time. It really sad that we say "we are not racist and we don't like racism" but end of the day it plays huge role in our life. :(


It is the moment of truth. Did you know that there was huge effort of Sheikh to grow this chennel? At least he (Adam) could have invited him to this special day, or at least mention his (Sheikh's) name in the video. I feel sorry for  Adam's brain washed robots (subscribers).
....................
Well, at least some people are rising up and started looking for the answers.
Here are some of the keywords that people are searching for.
If you are one of those who worship Adam Saleh (sorry I had to say this because some people are so mad that it seems like they will do anything for him) you will never hear the answer from him, and if you do please do tell us in the comments below.
-------------------
Updated on 23/07/2016


The reality came out at last.

This issue seems has resolved after Naz left Adam Saleh.