Are aliens watching our tv shows? 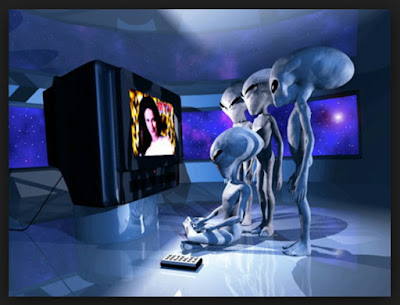 As you might already have heard many scientists saying that aliens from many light years away from earth listening and watching our tv shows, but after bit of research I found it very hard to believe that, they might be able to hear us but to see? It's almost impossible for them to see us, doesn't matter how intelligent they are.
Ad

I don't want to go too much into how tv works and all that, but here are some reasons why it is impossible for them to see us unless they get the video/ image encoder from human some how.

1. The TV signals should reach them.
Our TV signals go weaker and weaker as they travel far away from earth into the space so they (aliens) need to have powerful receiver to pick the signals up, if they don't have the receiver which can pick up our extremely weak signals then how are they going to know that we are even exist? let alone about watching us.

3. Need to have right encoder.
Ok, now let's say they have the powerful receiver and they pointing at right direction but what about signal itself? There are 2 types of  TV signals analogue and digital each signal carries sounds and images, they might be able extract sound from the analogue signal but what about the image? it's not possible to create an image without the right encoder, and as for the digital signal, it is not possible at all to extract sounds or images because every single character we transmit will work as a password for the aliens.
Ad

You probably think why is that? well that's because when we use digital signals we send 1s and 0s but how the hell aliens will know this is 1 and this 0 plus they'll have some alien letters not like ours, so first of all the alien encoder won't be able to translate our letters and then it'll have difficulties to create images out of it.

Think about this, if this happens and we are still on earth, then what will happen light years away where alien can't figure it out what we are doing with it.

So I'm 99.999999999% sure that they won't be able to watch our TV shows likewise we can't see theirs, and if some one still thinks they (aliens) can watch our TV shows then I don't have anything to say to those people who don't used their brains!

What about you? Do you think they can watch?
Ad