Struggle of life (story of a disabled elderly man) 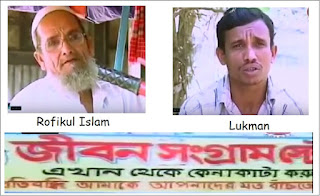 This is a story of an elderly man. In his early days, he was living with his wife and a son on a river bank happily. But he lost his house because of the river erosion, so he left the place and came to Dhaka (the capital of Bangladesh).

Luckily he got a new job and life was going quiet smoothly, but the luck didn't stay for too long. In a road accident he became disable and couldn't continue his job. After some time his only son left them (him and his wife) and gone abroad and didn't contact them at all.

His wife could not take this normally and passed away (died) after short period of time. So he became alone and helpless. He sold what ever he could and bought a wheel chair which he turned it into a shop and named it "struggle of life store". The shop is not just only for selling things, but it is his house aswel, he eats and sleeps in it too.

After watching his struggle one day a rickshaw driver (Luqman) asked if he (Luqman) could help him. At the first time he said no to Luqman, because he didn't want to be an extra pain for someone else.

But Luqman kept asking him to help him. One day he said ok but I want to talk to your wife first, because I want to know if she is happy with your decision or not. Luqman said ok that's fine, and  he took him to his house one day, then the man asked his wife about the decision of Luqman. She said I'm happy with it, no problem. So he said ok I'm happy to stay with you aswel and gave huge thanks to them!

At last the man found a kind son, a daughter in law and few grand kids to play with, even though it's (relationship of these people) not real but he thinks it's much better then his own son, who forgot his real mother and father.