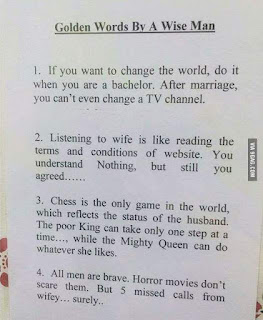 Well after reading those golden words from a wise man let's see what other people want to say.

Marriage is when a man looses his bachelors degree and woman gets her masters degree.

The mighty queen in chess can move so far because the goal in chess is to save the King. Omg stop finding reasons for men to think that what their girlfriends and wives will do is stop them from reaching their goals in life. If that's the case you're just simply in love with the wrong woman.

Golden words from an unhappily married man. Do you think he realizes he married the wrong woman? Or maybe he was just meant to stay free...

Haha!! Number four.. priceless.. I must be a different kind of woman, give your 100% while he does too, and don't dictate to him, it's a marriage.. let him have freedom with boundaries and trust him.

My doctor told me not to lift anything heavy anymore because of my back pain... Now i sit when i pee