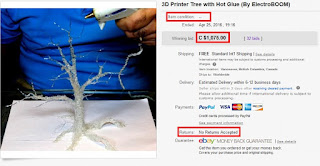 Yes, you read it correct. This Youtuber called ElectroBOOM managed to sell his simple hot glue tree to one of his (most probably) fan for $1,075.00. I was thinking that how fool that guy would be to buy a simple hot glue tree for that much money. I know some people have lot of money which they just want to waste in anything, but who buys this useless thing which maybe lose it's value in few days or few months.


People used to tell me that if you know how to sell stuffs, then you can just grab some soil from the ground and sell it at the rate of gold. And now I've found out that yes they were right. You just need to know how to put it right. I just feel sorry for those hard core fans who just want to do anything for their idol and the idol treat them as sheep. Come on guys use your brain.

This was part of his description on ebay.

"O_O I can't believe my eyes! So I'll have make it better now:
Hi there,

I am Mehdi Sadaghdar of ElectroBOOM (the YouTube channel) and 3D printed a tree using hot glue. I don't need this magnificent artwork and so I leave it here for the highest bidder. I'm sure you will cherish this master piece for years to come. And when I am at Brad Pitt level, the tree will be worth something!"

*I don't need this magnificent artwork.
That's because it's useless, just melt it to join something. That is why it made for.

*When I am at Brad Pitt level.
Well, by that time this tree will be either lost, broken or melted into something else.


At the end I just want to say that it's your money, spend where ever you want and as you wish, but spend it wisely so that you don't have to regret afterwards.