Which Building Is Closer? Mystery solved! 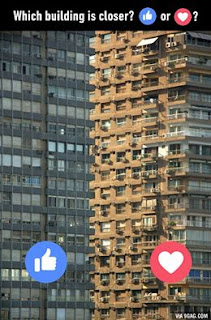 Did you come across this picture of 9gag? Well, people are going crazy about it, describing which one is closer. Some even giving hard proof of the gold building being the closest.

Answer: The left building is closer. You can find out by clicking on the picture and you will see the big size wikmedia picture. Any way let's read some crazy comments and have some lough.


* I don't care about which building is closer. I can't even come closer to my crush...

* you guys think a building from them is closer, but no grin emoticon. Both are the same, they are in same line. It's just the one who captured this, is a smart guy.

* The one on the right is closer because the sun reflects on it. If the left one was closer, it would hide the reflection from the right one. [lol, 96 people even liked this comment]

* The right one for the shadows . The left one if it's closer should create a shadow but it doesn't . So the right one is closer . [lol, it seems logical but what if the light coming from in between the buildings?]

* But for those who thought the right one was closer, why did you add 'Attention to Detail' on your CV ? Look at the photo using two approaches.. Top-down and Bottom-up. Tell me you see it. Obviously the left one is closer. [Well, I think he deserve an Oscar. It's true that some people pay too much attentions to small details and miss out the main point.]