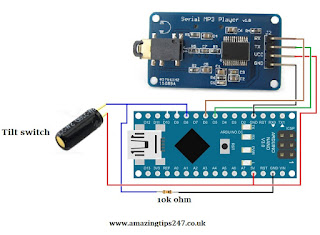 About a week ago a video gone viral in which two toddler were trapped (almost died) under a dresser  and mum said she was sleeping in another room and didn't hear the sound of falling dresser.


Well, there were so many people saying that the parents (specially the mum) of the toddlers are careless, and some said it's not possible to look after kids 24/7. OK it's true that it is hard to look after them 24/7 but at least the mum should have setup walkie talkies to the kids room, but it seems like she didn't wanted to get destructed by the sound.

So here is and idea which big companies can make the dressers smarter for careless people. I know they can make even smaller but this is just an idea and anyone can make it with arduino.

What you need?
1x Catalex mp3 player for arduino with a micro sd card.
1x  Any arduino board.
1x Tilt switch.
1x 10k ohm resistor.
Few jumper wires and the sketch below.


Watch the video to see the sketch in action


Note:
If you need more help to play sound then you see my other post here where I've explained in detail.