Laptop making too much noise after installing windows 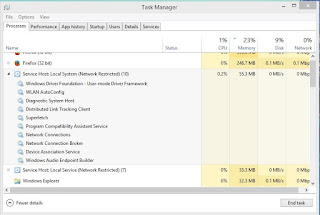 Well, I assume you probably  having same problem as mine. Recently I tried to download and install a screen recorder software but didn't know that they have sent virus with it. So after installing that bul***t software I had to go through lot of pain and at the end I decided to reinstall my windows 8.1


But after reinstalling windows I've noticed that my CPU getting too hot very quickly and that's why the fan started spinning at full speed and making too much noise. So these are the things I did and it's behaving normal now, smooth and fine.

1. Uninstalled all the unnecessary programs which came with my Lenovo G505s specially these two, Mcafee (instead, I installed Avast) and lenovobrowserguard. According to Avast lenovobrowserguard is a virus, see the screenshot below.

2. Stopped Superfetch, IP Helper and Background Intelligent Transfer Service from running at the background as I've seen many people said online, but unfortunately they all still running somehow.


3. Updating the windows. I think this one and number one solved my problem. Because after installing the outdated windows obviously it will look for the updates otherwise it's vulnerable to hackers. So straight after installing it tries to look for the important updates as soon as possible and when it tries to do many things at ones that's when CPU becomes very hot and fan starts making noise.

Of course it was lot of updates but I've set update setting to "Check for updates but let me choose whether to download and install them". At the moment I only did some of the big (memory-wise) important updates and try to do little by little every day.

That's all for this post I hope it helps you as it did mine. My laptop is now quieter than mice. Just kidding, it does make noise sometimes when it gets too much load on it.