How to control something with shadow 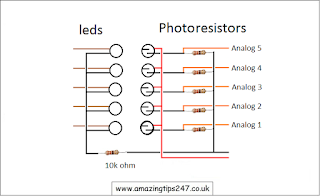 As you probably have seen people making stuffs which controlled by lights, like street lights are controlled by sun light and some robot cars that follows lights only. But in this post I want to share something which may seems odd but might be interesting because it controlled by shadow.

Note:
Remember because this catch hast to get the measurement from 5 different photoresistor so I got rid of the print code that has increased the speed. You might have to use it at least for one to set the appropriate number. So here is the code
......
Serial.print("First photocell reading = ");
Serial.println(photocellReading1);     // the raw analog reading
.......
just copy the code between dots and paste it right under the photocellReading1 = analogRead(photocellPin1);   and then reupload the sketch.