Well, I was thinking not to write anything about this topic but after reading some comments I couldn't hold myself back any longer.  It made me think that why all the famous people stay humble at the beginning and when they become famous they start showing their true colour. I know you might say not all of them like that. Yes, you probebly right but we can see most of them are like that though.

So what can normal people do about it?
Well, normal people can play big role in this. Imagine the root cause of it, it's most likely fame and money, and how do they get these two things? They get it because of normal people becoming mad and hardcore fans of them. Imagine what would happen if most of the fans if not all of them ignore these (famous) people, trust me they would beg you. It happened in the past and keep happening and will happen in the future too.

Let me give you a small example. There were few youtubers and they were quite popular all over the globe, so once they said that they are going to make a tour and said to their fans that we are going to meet andgreet here and there and we are taking part in this event and that event so you lot come. And they (fans) did show up in huge amount even though they (youtubers) charged them (fans) for tickets heavily.

But something happened when they went back to their country, they got split up and they don't make much videos together any more. And recently one of them announced that he's going on tour and asking his fans to come over but guess what, this time he is not charging for the tickets. Wow big deal!!! So that's kind of indicates that he knows this time people might not come that much or probebly they might not come at all, but because he has to hold his position that's why he's making it free. So in this story we can see that fans still can drag famous people down to their knees.

OK, coming back to the main cause of writing this post. Actually recently a Youtuber from Bangladesh become popular (even though in my view he is not that popular yet) he has got 135,203+ subscribers on youtube and 146,533+ on Facebook and his name is Salman Mohammad Muqtadir. 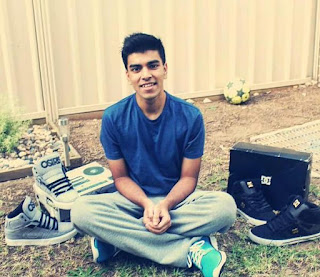 Yes, that's him and now let's see some of his comments. 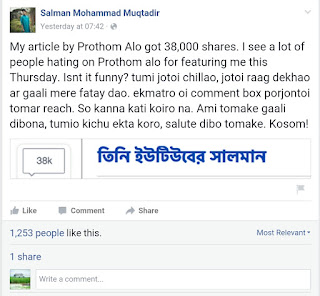 I hope you've already understood up to the "Isnt it fuuny?" but you migh get some difficulties to understand what he wrote after that. Don't worry I'll try to help you out. He says "it doesn't matter how loud you yell, or how upset you become, or how much you swear (probebly he meant at him), your reach is up to that comment box. So don't cry. I won't swear at you, you may aswel do something, I'll salute you then. I swear!"

I liked it how he said "I'll salute you if you do something" (he probebly meant good positive things maybe), but look at the other things he said to him "your reach is up to that comment box" Lol, it seems like his (Mr. salman's) reach is to every single human on earth or something. Calm down!

Not everyone is lucky like you.
Some people try their best to show their talents but they can't do it because of lack means. You probebly got popularity from your youtube videos which viewed by normal people hundreds and thousands of times, and who knows he probably one of the hundreds and thousands who made you popular. Please try to appreciate people and not hurting them.

Wow, the way he says "each penny spent on my vacation by me. I worked hard for it.", making videos, taliking or making some move front of a camera is too hard for some people. But there are so many people in the same country (BD) who work hard (by this hard I mean really hard) from morning to evening and get only 2/3 dollars a day, and who knows from many of these poor people might be fans of him.
So once someone gets too many fans then making money is nothing for him. It's just like grabbing water from the rain. Forget hardship, he can even make money jsut by sitting like a begger with some sponsored shoes (don't get me wrong, just saying).

It makes people very sad when a guy in a ferrari roaming around, enjoying his life then comes to a poor guy and says "wow life is so amazing and full of blessings". Think about the situation of the poor guy, how would he feel.

Request to famous people:
Please appreciate your fans, end of the day you are what you are because of those fans. If they dump you then you'll be unknown person again and no one will recognise you. Do good stuffs, because people look upto you and everyone tries to follow you and get success in their life.

Request to fans:
Please try not be a hardcore, mentally programmed like robot fan of someone. If you see something which you think is not suitable for him to say or do, then ignore him or dump him if necessary. You'll find many more entertaining people or things in the word to entertain you.

Please don't get me wrong. Stop hating each other and spread love and make the world a peaceful place to live on. Peace!!!