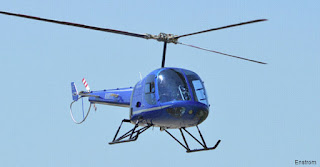 Never do this kind of silly things in your life to prove someone wrong as this guy has done and now got stuck in a huge problem. Let's see what he says..

"While arguing with the missus i claimed that i do what i want and told her if i wanted to buy a helicopter on ebay then i would. She told me you cant get helicopters on ebay so i proved her wrong. Turns out when you hit 'buy it now' you don't get a second chance or a 'are you sure you have £45,000 to spend on a helicopter' message before it actions your wish to purchase such a thing. I don't really want a helicopter but it seems i need £45,000 to make it disappear from my ebay basket."

Well, because he didn't want to buy the helicopter and doesn't have enough money to make the helicopter disappear from his basket, he turned toward crowd funding and opened a page to get some help, but the funny thing is that in 12 days he only managed to raise £10.00 and few people even helped him with some nice advise.

Caroline de'Berry says:
"You could have simply requested a mutual cancel and contacted the seller!? And like a previous comment you pressed buy then confirm. I smell something in your story and it's not a cinnamon bun!"

Duane Johnson says:
"When you click buy it now you get asked to confirm . You clicked buy it now then clicked confirm .. To me your just another timewaster... Sum1 won my caravan on ebay n didnt pay i didnt turn round to them n say cheers for wating my time heres a tenner for charity...."
-------
Someone commented on this post anonymously with an irrelevant link but because it came with helpful info so I'm sharing here with all.

"I think that everything said made a ton of sense. But, what about this? suppose you added a little information? I ain't suggesting your content is not solid., but suppose you added a post title that grabbed a person's attention? I mean "£45k Costly argument just to prove someone wrong." is a little boring. You might look at Yahoo's home page and watch how they write post headlines to grab people to open the links. You might add a video or a pic or two to grab readers interested about what you've got to say. Just my opinion, it could bring your posts a little bit more interesting. Here is my web site......"

Well, first of all thank you very much for a nice advice and suggestion. I don't really know if anyone shares my post or not, I thought I just write sometimes some tips (which most of it my own experiences) and sometimes just some common sense stuff, just to entertain and have some laugh or take some lesson from it.

You've said the title is boring and talked about how to grab people's attention.
Well, first of all I'm not a professional article writer, but hopefully I will become one some day if professional people like your self  keep advising me and suggesting me. So thanks a lot. :)