How to make Master and Slave ultrasonic sensors 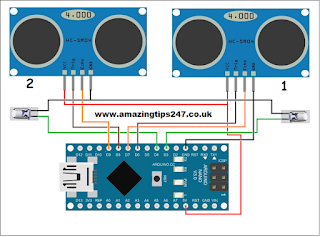 Some one wanted to know how to make two ultrasonic sensors work together but one should be given more priority on another.

Well, that's pretty easy. You probably have seen my other post called multiple ultrasonic sensors at once on that post you can see few lines of sketch like below.

The above code shows that there are three sensors and they all work at the same time, but obviously the Arduino board collects the data from all the sensors first then prints all of them together at once.

So that's one way of giving priority to a sensor, but in this post I want to share a sketch by which you can control one sensor with another sensor. The true master and slave relationship.

That's all for this post if you want the diagram of the sketch than please have a look at top picture. Please add resistors to the leds if you don't want to burn you them out.

Newly posted:
How to gain followers on tiktok fast, How to make a video with a comment on TikTok