Do dislikes affect your suggestions videos 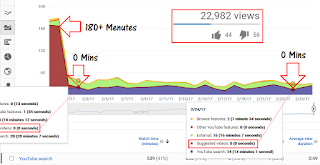 This is probably another one of my angry posts. One of my videos was going quite well, getting more views and I was getting little bit of ad money as well. But along the views it was getting quite few dislikes too, until it reach 100 rating with 44 likes and 56 dislikes. I was kind of happy to see my first ever video got 100 ratings. But my happiness soon vanished in thin air when I realized that YouTube has stopped suggesting my video and started getting less views.


I searched on Google about if dislikes affects or not but found a site says dislikes doesn't matter. But in my case it did and it really hurt me a lot.

Why people dislike your video?
Well, I've tried my best to make them understand and I did a demonstration to prove it and that works as well. But people still disliked it which I never understood, WTF wrong with people. I even told them please tell me what's wrong with the video? Without saying anything they disliked and gone. It's f**king ridiculous! If someone tries to explain you something and you understood it, you can just hit the like button and go then that understandable. But if you didn't understand something and hit the dislike button and go without asking then it's stupidity at its best.

You might think people quickly dislike and go in the middle of video because they don't want to waste more time in it.
Well, you might think that's smart way of saving time and look for something else but I say that's totally bulshit. And these ultra smart fools are more like to waste their time (I should say life) by watching useless things like how to destroy pilled up cups by trowing match sticks and think as if they did the world a favor, or maybe try to fix a dent car with eggs and axe. By the way I don't mislead people with title or thumbnail, but those people do mislead they get the most views and like. Really people are crazy. I know many people already left this page because (the same thing saving time for useless stuff) can't be bothered reading all these. But those who came this far, I hope they have learned something from this post.


How to save your video from getting more dislikes.
Well, by reading the above paragraph you might have already known that how stupid people are nowadays. They might think they are smart and educated but will act like a extremely fool scumbags. Any way let me tell you the solution which hopefully work for you as well as it has slightly working for me.

Most of time you'll get two kind of people. Haters and people who go with the flow.
Haters:
Nothing you can do for these scumbags, you just leave them alone and they will forget you over the time. Because over time they will be tired of coming to your channel just to give a dislike, they will so lazy that won't be bothered come back.

People who go with the flow:
Trust me this kind of people are more dangerous if they go opposite way (disliking way). These people don't have mind on their own. They will come and see which way the most people going, if they see likes they will like the video and if they see dislike they will dislike. Because they think majority is always right. So the solution all these nonsense people is to hide the rating so they can't see what's going on and judge the video by its content and haters will go away because they will think that if they dislike it, no one can see so what's the point giving dislike. And that's how you can save your video from more dislikes.


I hope this helps you and if it does then don't forget share this with who it needs.


Tags:
Do dislikes affect your videos