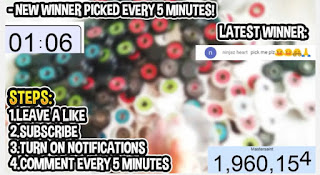 By reading the title you probably think that I'm giving away fidget spinner, right? Well, actually I'm not giving away any fidget spinner my friend, but in fact I want share something with you what I've learned from watching this live stream.


I wouldn't write this if the guy who own's the channel didn't lie. A live stream video caught my eyes by the title "ULTIMATE FIDGET SPINNER GIVEAWAY!!" so I opened it just to see how fool and stupid people begging for a fidget spinner which doesn't cost much.

The things he lied:


Benefits he's getting:
Who's getting most of the benefits:
I was just watched the video for few minutes and thinking that how this guy using people to generate money so easily and people were just like sheep, begging for few quid worth fidget spinner and 99.99% people probably even won't get it.

Summary:
Sometimes I think that let people be fooled because people don't saying/exposing the truth, so what's the point telling them the truth and exposing. Those people who can fool people get the most benifit out of it.