Are iPhone users that stupid! 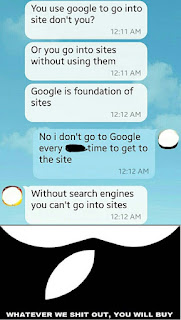 Well, I don't hate iPhone or iPhone users but I don't really like how iShit (iPhone) make people so stupid and dumb and they think they superior to others, because they have this shitty phone in their hands and brag about the price and shit all the times.


Actually I wouldn't write about this if my friend didn't piss me off with his useless logic, and I thought there might be so many other iSheeps (iPhone users) out there who are unfortunately think like him.

So let me tell you what really happened. I sent him a link where it talks about many apps that have bugs in it and steal your bank and personal details and then they steal your money by using those informations. That's why  I said to him don't use too many apps on your phone, because I knew he uses apps for almost everything.

Instead of taking the free advice he said "Go buy yourself iPhone who told you to use google to search". Well, let me tell you one more thing, by Google he means everything, He thinks that without Google you can't view a single website. Even though I've explain to him in detail about browser, search engine and website.

I told him look, Google is a search engine (it only searches and finds out websites, pdf, images and so on) and there are so many other search engines too. like DuckDuckGo, Bing, Yahoo, Ask and and so on, and Google Chrome is a browser and there are so many other browsers aswell like Internet Explorer, Opera and Mozilla Firefox , and website is a actual site where you find all the info and stuff.

But sadly that didn't go into his head, that might have caused by excessive using apps on his iPhone which limited his mind to apps so he can't think anything outside of it. :(


Note:
Please don't get me wrong, use what ever phone you like but keep your mind open and try not to brag about something which not worth it to brag that much.

At the end let me answer few things which you've seen in the picture.

You use google to go into site don't you?
Well, not necessarily. If you have a link of a website, you can go to that specific site directly without using Google at all.

Google is foundation of sites
No, not at all. A website can be independent without having Google's influence altogether. By that I mean, you can view and get information from a website without using Google or Google Chrome.

Let me give you an example. You made a website and uploaded on a server then you accessed to that site by using Mozilla Firefox, you know the URL so you don't need to search in Google.

Although I give credit to Google for making small websites popular, but this doesn't work one way only. By adding small sites to its search engine data base it became huge and once it became giant it started getting revenue from it, so in a way if you look closely you will find that if those websites tell Google not to index them then Google will lose huge amount of money, so that means Google is in need of those sites too.

Any way I hope you have learnt something from this post and you will open your mind up and not stick to one thing and think that the world is not limited to your iPhone only.Thanks