This why you should stop sharing RT posts 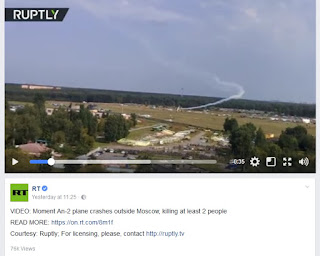 After reading RT's legal disclaimer I've stopped sharing anything from RT although before reading that I used to share links to my family and friends and sometimes on this site as well, and thought it's a very good source of news and stuff. But after reading their disclaimer it became clear to me that these scumbags are not after informing people with good stuff, in fact they are greedy money hungry scumbags.


Let me share some of the things they said in their disclaimer. "Except as specifically permitted by the TOU, you may not copy or make any use of the Content or any portion thereof. Except as specifically permitted herein, you shall not use the Content, or the names of any individual participant in, or contributor to, the Content, or any variations or derivatives thereof, for any purpose, without RT’s prior written approval.
You may download copyrighted material for your private use only. Except as otherwise expressly permitted under Russian copyright law, no copying, redistribution, retransmission, publication or commercial exploitation of downloaded material will be permitted without the express permission of RT and the copyright owner."

By now I think it's clear to you as well that you can't do anything with their contents unless you use it for your self. I'm not sure who in the right mind would set this kind of rules. What the hell someone would do with their contents if they can't share with anyone? One question was going through my that if people are not allowed to redistribute (share) then why the hell do they always beg people to share their stuff? And this is the exact same question someone asked them. 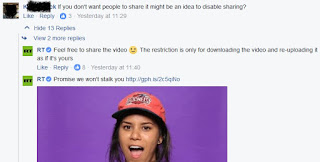 And the Rt replied with " Feel free to share the video 🙂 The restriction is only for downloading the video and re-uploading it as if it's yours". More replies....

My question to RT is, first of all not a normal human being claim someone else's work as his own. And secondly you always put a giant fu***ng watermark in the middle of the videos. Let's say if someone downloads it and uploads it somewhere else, people will still be able to see your fu***g Raptly watermark from few hundred miles away, and you still say that guy can call the video/whatever as his own?


Another thing about RT's contents is that they will steal someone else's video and edit a bit and think that they've got the right to do so under fair use but other people don't have the right to use RT's video under fair use. What a nonsense and stupid mindset. As if they got the extra power to garb what ever they want and call it fair use and put their log and stuff and then claim the video of their own. And at the same time no one allowed to touch their contents. Are you feeling all right?

Lastly I want say to the wast majority of people who are working like a free slaves for them. Because of you these kind of scumbags are up in the sky. Why do you have to share their links? why don't you read their term&conditions. That's where these people clear things up. They take control of everything what you can do and can't. Sadly most people are like sheep to them, they make you do what they want to. Yet many people don't realize.